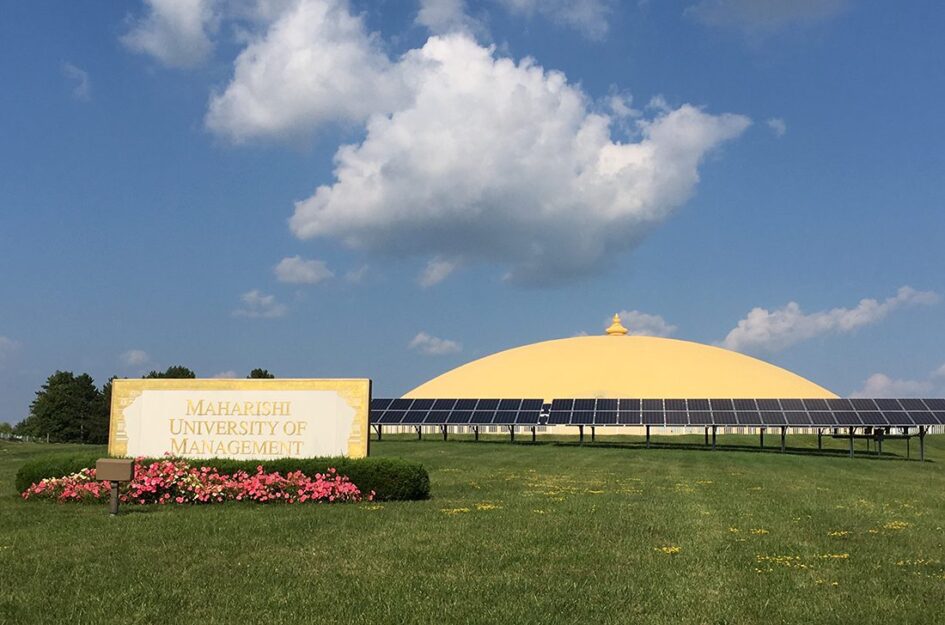 The best term I’ve heard to describe Fairfield and the Maharishi University is “cognitive dissonance.”

Drive into the downtown and you’ll find gorgeous Victorian-era homes, a red stone courthouse with clock tower, and a central park with a gazebo out of a Hollywood back lot.  You’ll also find Indian restaurants, an Ayurvedic Apothecary (right next door to Kim’s Kloset), and Vastic Rectification Without Demolition (Had to look that last one up. Essentially Indian Feng Shui).

A few blocks away from the downtown is the Maharishi School of Management. And Transcendental Meditation. And Yogic Flying. Yes really, they host World Championships.

Maharishi Mahesh Yogi was briefly the guru to both the Beatles and the Beach Boys. When he needed space to start his transcendental mediation and yogic flying center, Fairfield was the choice. The location isn’t quite as odd as you’d think. The former Fairfield University had closed and the buildings were available, in a cheap location.

As an extra, bizarre side-note: Many of the professors and deans at the defunct Fairfield U came to work for Mount Senario College, in Ladysmith Wisconsin. Ladysmith is my hometown and my father worked at “The Mount” until it too shuttered its doors.

Visiting the campus is like visiting another world. For starters, there’s the Golden Dome of Pure Knowledge. This is right next door to the Tower of Invincibility. There’s also a very nice organic grocery and cafe behind the golden domes. Many of the main campus/classroom building are attractive modern Vedic buildings (a type of green architecture created by the Maharishi based on Sanskrit texts).

But further in, things are far shabbier. In her book “Greetings from Utopia Park,” Claire Hoffman describes growing up in the community. Hoffman’s family lived in the trailer park, Utopia Park, which is still there. The name adds a certain, ironic poignancy as it is even sadder-looking than Hoffman describes it during her teen years. Like much of the campus, there seems to be little care or attention to details, particularly landscaping. Paring lots are gravel with ill-defined edges. Weeds and shrubs grow through fences and choke out many buildings. Even the main, show-stopped buildings like the domes have clumps of taller plants which seem mostly to be bigger weeds.

A few miles outside the campus is another neighborhood, the Vedic City. It boasts the Vedic Observatory, a collection of cement…objects where you can:

Align your awareness with the intelligence expressed throughout the cosmos, align your physiology with the physiology of the universe and gain the evolving quality of the ever-expanding universe in your individual awareness. –Maharishi Mahesh Yogi

The paper handout made me have a deeper appreciation of what being dyslexic must be like. There were words on the page, but they failed to make any sense whatsoever. Looking at my photos, my mother also pointed out that she thought it was a sewage treatment plant. The location of the Observatory, however, is gorgeous – open fields and lovely Vedic houses, each decorated with a gold stupa-like structure.

One final stop took us to The Raj, a Vedic Health Spa. Here again was a magnificent main building, yet the gleaming BMWs and Mercedes were forced to park on the verge of the gravel road, half on the scrubby grass.

This is truly the most bizarre and incongruous town we have ever visited. The clashes between the townies and Maharishi folks appears to have simmered (though I’m sure there is still tension). The town itself is prosperous and clean, likely from a large influx of visitors to The Raj and for meditation classes.

Still, there’s something very off and rather uncomfortable about the shining domes and the sad, dilapidated student/member housing. The top brass of the University are clearly not living in the communal housing or trailers, but off in the lovely Vedic City housing. Whether the University is a good school, or whether the members are students or cult members, I can’t say. But if you’re in the area, it is definitely worth a visit. 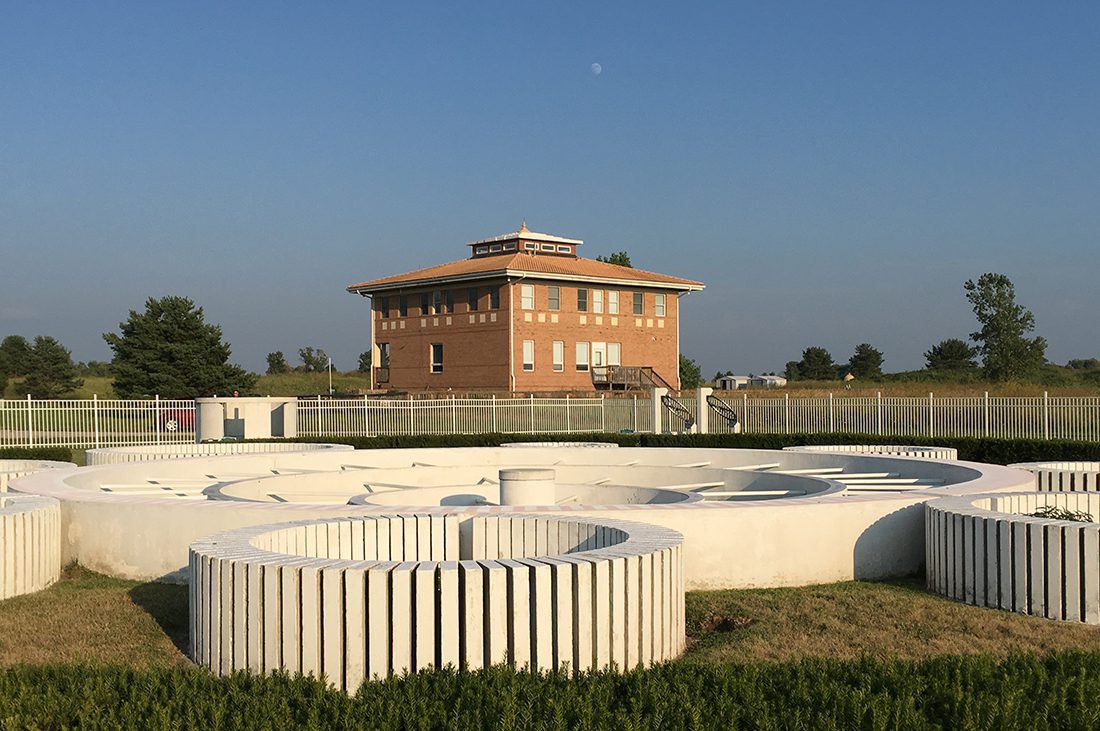